If you have ever wondered about celebrities and how they stay together despite the hype and hoopla surrounding them, the destiny cards can help you figure out some mysteries. Kristen Stewart and Robert Pattinson have been mighty secretive about their relationship from the very start. What’s really going on between them?

In the Twilight movies, Robert Pattinson and Kristen Stewart play the lead roles as Edward Cullen and Bella Swan. According to Hollywood’s endless rumor mill, from the very first movie, they have shared a romantic connection. You can bet the movie directors and investors were sweating with their stars involved like that! This franchise is supposed to make millions! The stars in Breaking Dawn alone are each getting paid $12.5 Million apiece! What if they break up! What will happen to our films!

But they needn’t have worried.

Robert Pattinson and Kristen Stewart are tightly bound to each other. Robert was born in May 13, 1986, which makes him the six of diamonds and the ten of hearts.

Kristen Stewart was born April 9, 1990, which makes her the queen of diamonds and the three of spades.

He’s a taurus, she’s an aries, where’s the attraction, you might say! Well, one thing they’ve got going for them is that he’s a tiger and she’s a horse. From a chinese astrology perspective, they’re very compatible.

But what about the destiny cards?

If you look at pictures of them together, you’ll see a story emerge.

Kristen Stewart is never looking at him. Robert is always gazing adoringly at her. And the reason is… 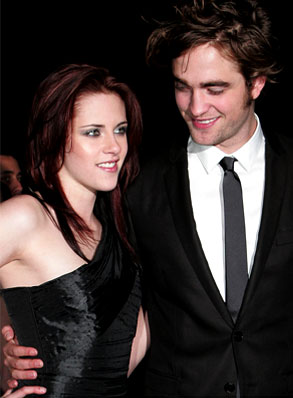 Their birth cards are precisely aligned one above the other in the life spread. The six of diamonds is seven cards away from the queen of diamonds. This means that their first connection is a Neptune connection. Kristen is Robert’s Neptune card, which means that she’s his fantasy, his dream woman. He will never see her as she truly is. Which means as long as she wants to be with him, they will stay together.

Having watched this exact same card combination play out with my own parents, I can see why he’s looking at her in every picture.

But this isn’t the whole story, of course.

Kristen Stewart’s PRC, the three of spades, that first karma card is Robert’s birth card, the six of diamonds. This means that she will see him as challenging, and he will see her as a blessing. Whenever we are in a relationship with a karma card, it can be difficult to disentangle ourselves, because on some level, it just feels ‘right’ to be together. We feel like we know this person better than we know other people. They can drive us crazy, but they can also remind us of parts of ourselves that we have yet to overcome.

One of their main connections that they have is between Rob’s PRC, the ten of hearts and the queen of diamonds, Kristen’s birth card. This means that Kristen is also Rob’s Saturn card. So he will not only have fantasies about her, he will also find things to criticize. But she can choose to take those criticisms well, or to take them personally. Time will tell. So far, it looks like they’ve been together since 2008, from the first Twilight movie. Not bad!

Another connection they have is the past-life Uranus connection, as the six of diamonds is six cards away from the Queen of diamonds. This means that they like each other as friends, and neither will attempt to hem in or change the other. It’s a good connection for compatibility, but not the best connection for a romantic relationship.  This might help ease the criticism of the Saturn connection.

If you look at Kristen Stewart’s planetary ruling card, the 3 of spades, you’ll see that it’s also Robert’s PRC Ten of Hearts Pluto card, which can represent some long-lived attraction.

Do you begin to see what I see? The majority of the connections flow one way. Towards Kristen Stewart.

Because the connection flows towards her, she naturally feels like the center of the relationship, and in a very real sense, she is.

Do you see any more connections between Robert Pattinson and Kristen Stewart? What have I left out?