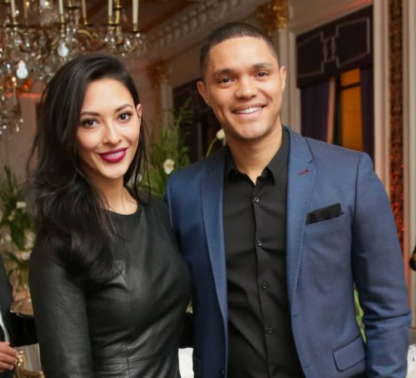 Trevor Noah is the host of the Daily Show, and author of Born A Crime.

Jordyn Taylor is a singer and model.

At first glance, you’d think that Jordyn Taylor and Trevor Noah didn’t have any connections. OK, they are both water signs, so they both feel deeply.

But she’s also a horse, and horses and rats do not get along well together. At all. Two dominant stubborn personalities! Yikes!

But the destiny cards tell a different story.

There’s a mutual diagonal venus connection between his 5 of diamonds and her 6 of clubs.  That means they both love each other.

Her birth card, the six of clubs, has a past life neptune connection with his PRC, the King of clubs. That means he’s perfect man! She will overlook a lot of his faults and put him on a pedestal, at least for awhile. Scorpio horses are good at this.

Her planetary ruling card of the Queen of Clubs has a past life moon connection to his King of clubs, which means that she will love to support him. And there’s a nice past life mars connection as well between her PRC, the 10 of clubs, and his PRC, the King of clubs. That will keep things sexy and spicy in the bedroom!

Her birth card, the 6 of clubs, is also Saturn to his PRC, the King of Clubs. That means that she will remind him of how he can be better, and if he’s mature enough, he will accept her reminders, and appreciate how she encourages him to be his best.

Even though she’s a triple club, he has a King of clubs as his PRC, so she will connect with him best when he acts out this card. He might tend to not express his 5 of diamonds as much in this relationship. And his 9 of diamonds first karma card can make him feel like a victim in life, it’s a piscean energy. And indeed, when he came on the daily show, there were a lot of people attacking him for NOT being Jon Stewart. And being black, and from South Africa.

With all of these moon, venus and neptune connections, this is a good match!