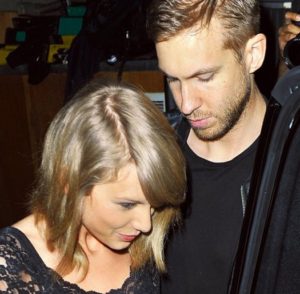 What makes them compatible or incompatible? Let’s see.

Calvin Harris was born 17 January 1984, making him a Capricorn Pig, and Taylor Swift was born December 13, 1989, making her a Sagittarius Snake. Snakes can squeeze pigs just a bit too hard for their liking! Capricorns and Sagittarians do not always get along either. Capricorns are hardworking and serious folks. Sagittarians tend to take things a bit more lightly. Is this relationship headed for the end before it even starts?

Well, what are their destiny card connections?

Calvin Harris is the 10 of diamonds, 5 of hearts, and Taylor Swift is the 5 of clubs, 7 of diamonds.

10 of diamonds men tend to be all about their work, to the exclusion of all else. The 10 of diamonds sits in the most blessed spot in the whole spread, the Jupiter/Jupiter position. They can make a lot of money and they should work for themselves. Being a Capricorn on top of this may make Calvin Harris a work-a-holic. Not taking enough time for relationships may have been a problem for Calvin Harris in the past. Or he may have just gotten involved with people he works with. Since both he and Taylor are in the music business, this relationship makes more sense for him. What about Taylor?

As a 5 of clubs she wants to experience variety in all things. But because she’s also the 7 of diamonds, otherwise known as the millionaire’s card, she cares a lot about her career and money too. They are both diamonds, and so both of them will care about succeeding in a worldly way. This can help them understand each other.

They are pretty far apart from each other in the life spread. But let’s take a closer look. 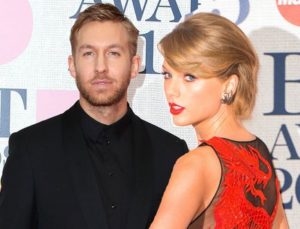 Right away we can see that Calvin Harris’ planetary ruling card, the 5 of hearts, is Taylor Swift’s first karma card. What does that mean? It means that they are alike in a lot of ways. 5s generally want variety in life. 5 of clubs want mental variety, they like to move around and never be tied down to one thing. 5 of hearts are pretty similar, except that they like variety in relationships. When the 5 of hearts is your first karma card, it means that you tend to embody the negative aspects of that. So you might be known as a playboy or playgirl, and leave a trail of broken hearts wherever you go.

If she has the patience to see how Calvin Harris acts out the parts of herself she doesn’t like, she might get a lot  out of this relationship.

This relationship might be rocky, but it certainly will be an experience for both of them, and that’s really what they’re after.