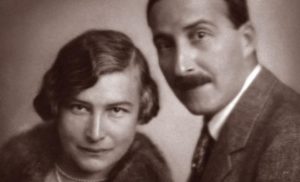 Stefan Zweig was a famous writer in the teens and twenties in Austria and Germany. In the 1930s the tide turned against Jews and he was forced to flee to England and then to Rio, in Brazil.

He married Friderike Maria Burger in 1920. She was born December 4th, 1882, making her a Sagittarius Horse, Ace of diamonds and planetary ruling card, 3 of spades.

At first glance, they would be friendly with each other and understand each other, as Snakes and Horses get along, and Sagittarians both love to travel and allow their partner their freedom. They would also have that added bonus of brains and ambition.

At second glance, they both have unmarriageable cards. The 5 of hearts loves variety in love. The ace of diamonds loves being alone too much to settle down, unless they are very insecure.

But what happens next is quite beautiful. You see, they have lots of connections in the destiny cards that make them a beautiful match. First is the venus connection between Friderike’s Ace of diamonds and Stefan Zweig’s birth card, the 5 of hearts.

Their next connection is between his birth card, the Ace of diamonds, and her planetary ruling card, the 3 of spades. This is a venus connection, creating a love connection flowing both ways.

Finally they have the uranus connection between Friderike’s birth card the Ace of diamonds, and his planetary ruling card, the 7 of clubs which means that they would be friends first, and allow each other their freedom. Even their divorce was apparently amicable.

They would spend long times apart, and because she was an Ace of diamonds, she wouldn’t mind. But he would always write letters to her, which made their separation more bearable.

Sometimes it’s best for two unmarriageable cards to get together!

Stefan Zweig eventually left Friderike after years in exile, feeling unable to return to Austria because of Nazi persecution, and married his secretary Elizabet Charlotte (Lotte) Altmann, born May 5, 1908, his secretary in 1938.

This birthday makes her a Taurus Monkey, with her cards the Ace of spades and the 7 of diamonds, a hard working and semi-fixed card. Changes in life would be hard for her. But as a Taurus Monkey she would always be able to bounce back. Since she and Stefan were both sevens, they understood each other in their way, to have spiritual aspirations.

Her first karma card, the 7 of hearts, magnified this connection, and since it was a venus card to his birth card, the 5 of hearts, it meant he truly did love her.

The pessimism of the 7 of clubs is always there, and they must learn to think more positively and universally if they want to escape these doldrums.

Zweig and Lotte committed suicide together in 1942 in Rio by taking an overdose of barbiturates. His note said he preferred contributing to the culture of his homeland which was now destroyed, and in his 60th year, after 5 years of wandering, he did not have the energy to continue to rebuild a life in Brazil.