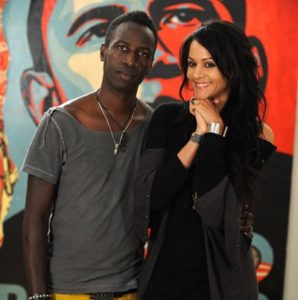 Saul Williams is a famous slam poet, writer, singer and actor. I was first introduced to Williams’ work in college, in our exploding text class on slam poetry. It was pretty special. He was in a movie called Slam, which is one of his best roles, and his vocabulary and delivery is simply gorgeous. He’s got to be one of the most talented poets/rappers out there.

Persia White is a famous television actress from The Vampire Diaries and the series Girlfriend.

Persia White was born October 25, 1972, which makes her a Scorpio Rat, ten of hearts, ace of hearts, and 3 of spades.

What were their connections?

Two Rats getting together is usually a good thing. Rats are security conscious, but also very smart and interested in personal gain. What might have been hard for them both is that both are artists, poets, and actors, which makes a less stable life than a Rat might prefer. They would both want a more stable partner to lean on.

Saul Williams is the nine of clubs. The Nine of Clubs’ first karma card is the Queen of hearts. That makes him Persia White’s venus card. This means that she would love him.

For Saul Williams’ second card, the two of diamonds, his PRC, Persia’s birth card, the 10 of hearts is his Saturn card. That means that she would remind him how he could be better. She would be naturally superior to him. And indeed, her acting career has been more successful than his career.

He would see what he wanted to achieve in her. Maybe lots of friendships and fun, as the 10 of hearts can have a lot of fun. The Ten of hearts first karma card is the Jack of clubs, which is another venus connection flowing from his 9 of clubs to her. This means he would love her too.

The ten of hearts, because their first karma card is the Jack of clubs, can make them somewhat dishonest. And Persia’s PRC, the Ace of hearts, makes her more of a person seeking love, perhaps in love with the search more than with the capture. As a ten and an ace, she would be more self centered than other cards. The ten is like the ace, magnified.

One of the hard things about being in a relationship with the 9 of clubs is that they are very seductive. It’s part of their first karma card, the Queen of hearts. But that same seductiveness doesn’t make them good long term partners. They can be so interested in seducing new people around them that they forget to keep the home fires burning.

As the two of diamonds, Saul thrives in business partnerships, and indeed he was working with Trent Reznor to do another album. If he ever gets caught out in a lie, it will come back to bite him, instantly, due to the first karma card of the two of diamonds being the 6 of clubs.

When two seductive people get together, it can be fun as long as they don’t take it too seriously. As soon as they got tied down and married (security! Rats want security! But the 9 of clubs and Ace of hearts don’t want security) they lost interest.

That explains why Persia White and Saul Williams broke up.
[raw] [/raw]