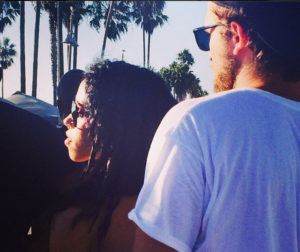 Rumor has it that FKA Twigs and Robert Pattinson are dating. I never thought I would type that sentence.You couldn’t think of two more different people. FKA Twigs is an artsy singer known for her videos that really push the envelope.

Robert Pattinson was a model who broke into acting with Harry Potter and the Twilight series and who hasn’t done much of note since.

When was Robert Pattinson born? He was born May 13th 1986, which makes him a Taurus Tiger, 6 of diamonds and 10 of hearts.

How are he and FKA Twigs getting along ?

She’s keeping it private, but what do the cards say?

They are both sixes, which means that they will be hard to ruffle, and they will each appreciate the stability the other has. On the downside it can make them stuck in ruts.

Since FKA Twig’s a Jack of diamonds and a 6 of clubs, she will reach for significance with her life, and she’s going for it.

Her saturn ruler will not let her get away with any shirking of responsibility in this lifetime. This is a responsible Jack of diamonds, as far as that goes.

Rob is a secret Jack as well, because the ten of hearts first karma card is the Jack of clubs. The Jack of Clubs can make Rob less than truthful, but because he’s also the 6 of diamonds, he will be less likely to shirk his responsibility.

They are both here to learn about responsibility.

Robert Pattinson’s first karma card for his 6 of diamonds is the 9 of clubs, which has a nice past life mars connection to FKA Twig’s 6 of clubs. They will be like magnets, attracted to each other, but in a healthy way. This is easier to deal with than a life spread mars connection.

So it’s a relationship they can grow in, and it already has the plus of a lot of attraction.

Tauruses and Capricorns are both earth signs, so that can make them more compatible as well, both love to eat, to be connected to the earth. Capricorns are more hard workers, especially the 6 of clubs, where the 10 of hearts is more of a party boy. He might help FKA Twigs party a bit more, and she might help him be a little more responsible.

When it comes to Chinese astrological connections, Cats and Tigers do not mesh well. Tigers love conflict, and Cats actively avoid it. So for this relationship to last, Robert Pattinson will have to tame his aggressiveness. Luckily he’s a Taurus Tiger, one of the most mellow, upstanding Tigers you’d want to meet.

This could be love!