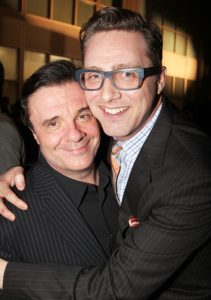 What are their connections in the cards?

The Eight of Diamonds first karma card is the Queen of spades, which is 3 cards apart from the 9 of spades in the past life spread, making it a sexy past life mars connection. Nathan Lane is so attracted to Devlin Elliott! And the feeling appears to be mutual.

Their planetary ruling cards, the 2 of diamonds and the 8 of diamonds, have a Uranus connection in the past life spread, making them friends first, with respect for each others differences. They allow each other a lot of freedom in this relationship.

This is a beautiful connection and a marriage that will last.

Nathan Lane is known for some of the most incredible performances in stage and screen, with a famous role being Albert in The Birdcage, starring opposite Robin Williams.

As a 9 of spades, he will find it easy to tug peoples’ heart strings, because of his first karma card, the king of hearts.