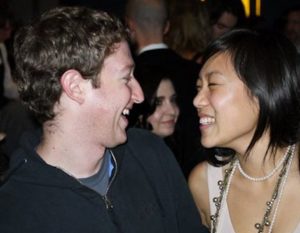 Mark Zuckerberg was born May 14th, 1984. this makes him a Taurus rat. He started Facebook in college.

Priscilla Chan was born February 24, 1985. This makes her a Pisces Ox. She graduated from med school in 2010. Priscilla Chan and Mark Zuckerberg met in line for the bathroom at a Harvard party in 2003. Zuckerberg’s fraternity, Alpha Epsilon Pi, was hosting a party and Chan, a sophomore from the Boston area, was there.

In Chinese astrology, Oxen and Rats get along well. Oxen are even-tempered and soothe the nervous rat. Both are intellectual but Ox does not grab the limelight when Rat wants it. Ox is content to be in the background as Rat goes out to win the day.

As a Jack of clubs, he likes having intellectual arguments and discussions, even playing devils advocate just to keep it going. In his Jack role, Mark Zuckerberg does not fight fair, and he is known to be accused of idea stealing (from the early days of facebook.) Jacks do want power, but they don’t want the responsibility that comes with that power. They are not born to rule, like a King. So Facebook often only makes changes after they get caught lying, or cheating the people that use it. Typical irresponsible Jack behavior.

What are their destiny card connections?

Wow. Talk about a lot of connections!

Mark Zuckerberg is Priscilla’s PRC. He is also her neptune card. That means that they will be very alike. When someone is your PRC, it can also mean that if there is something you don’t like about yourself, you will see it in them. It’s a bit like having the same birth card, but a bit easier than that. When you are with your PRC or birth card, if you like yourself, it’s often like giving a present to yourself.

Because he is her neptune card, she will also have lots of fantasties and dreams about him.

In the past life spread, there is a nice past life mars connection going from Mark’s Jack of clubs to Priscilla’s Ace of hearts. This makes for a sexy connection that is not as disruptive as it is in the life spread.

No wonder they got married.

Since rats crave security, and oxen are steady and stable, you can expect this marriage to last a long time.