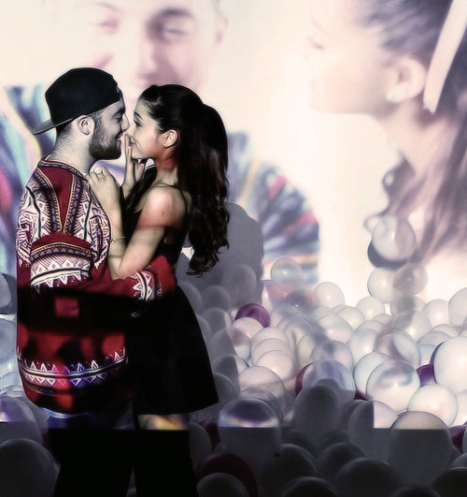 Mac Miller just declared his love for Ariana Grande and they’ve only been dating a month!

WOW! What are their connections in the cards?

Mac Miller was born January 19, 1992. This makes him a Capricorn Goat, 8 of diamonds, 10 of spades. As an 8 of diamonds, he is sitting in the crown line. It means he will have early creative success, and he HAS! It also means he might overindulge in partying, drinking, and more, because the 8 of diamonds tends to overdo things in life. As a Goat, he might be even more interested in chemical assistance for his creativity. Goats love to be partnered, and the fact that Mac Miller so far has stayed out of celebrity relationships means that he might be waiting for the right person to come along.

The 10 of spades works hard. The card literally means success in work. They can often have a conflict between work life and home life, but they are a super worker and can have great accomplishments if they remember to just keep their nose to the grindstone. Meeting someone romantically through work is a very 10 of spades thing to do. He’s always working, so of course, his creative collaborator, Ariana Grande, is someone who comes to his mind a lot.

Ariana Grande was born June 26, 1993, and this makes her a Cancer Monkey, 4 of clubs and 6 of hearts. As a 4 of clubs, she’s a hard worker, and she loves to be the best at what she does. As a 6 of hearts, she seeks peace in all of her relationships. This can also lead her to stay in a rut with relationships, sometimes going for a long time without a relationship, and sometimes staying with someone too long.

As a cancer monkey, she can get a little TOO worried about love, and her emotions, but a gentle goat like Mac Miller can soothe her worries.

What are their connections? He’s diamonds and spades, she’s clubs and hearts!

Are they connected in any way?

Is this just an infatuation?

Believe it or not, Mac Miller is REALLY into her.

Why? According to the past life spread, his karma card is the 4 of hearts, and her prc is the 6 of hearts.

That means that he’s got a past life love connection going on for Ariana Grande.

And Ariana Grande is into Mac Miller also, because she’s got a vertical venus and mars life spread connection going from her 4 of clubs to his 10 of spades AND 8 of diamonds!