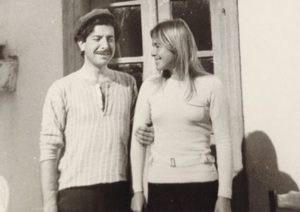 His birthday makes him a 3 of clubs, 9 of hearts, Libra Dog. The 9 of hearts would make him be impatient in getting his personal desires fulfilled, and would lead to losses in love. He wrote about these extensively in his many albums. As the 3 of clubs, he would be extremely creative, write a lot, but also be prone to panic attacks. Perhaps this was why he became a zen buddhist monk for awhile, to try to calm his mind through meditation.

As a club and a heart, his main goal in life was not money, but interestingly, he seemed to attract people who were mainly diamonds as his life partners. We shall see why below.

Each decade he had a main relationship. In the 1960s, he was in a relationship with Norwegian Marianne Ihlen, born May 18, 1935. This birthday makes her a Taurus Pig, Ace of Diamonds and 5 of hearts. She encouraged him to write and they lived in Greece together for years. He got very sick and moved back to the US and that ended their relationship, and he wrote a song about it called So Long, Marianne.

In the 1970s he was in a relationship with artist Suzanne Elrod (Ox, born 1949) and they had two children together. I have been unable to find her full date of birth. They met in an elevator and soon started living together in the Chelsea hotel. She said “I felt married” but they never got married. He said he was too afraid to get married. Fear is a trait typical of 3 of clubs. 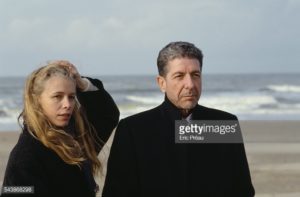 In the 1980s he was in a relationship with Dominique Isserman, born April 11th, 1947 and he dedicated the album “I’m Your Man” to her. This birthday makes her an Aries Pig, Ten of diamonds, Ace of diamonds. 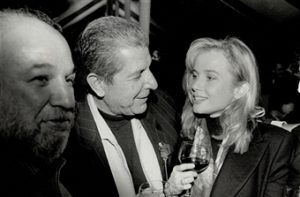 In the 1990s he was in a relationship with Rebecca de Mornay, born on August 29th, 1959. This makes her a Ten of hearts, Ten of diamonds, Virgo Pig. She is a famous actress known for her role in The Hand that Rocks the Cradle, among many other movies. She produced an album for Leonard Cohen, who, despite the fact that he toured constantly and had many hits, was defrauded of his money by his manager and even though he won a $9M settlement in court, was never able to collect it.

Aside from his penchant for Pigs, what else is interesting about his choices of relationships is that two of these women are ten of diamonds, and two of them are Ace of diamonds. The women that chose him, as pigs, would appreciate his cultured aspects as poet and singer/songwriter.

Why would Leonard Cohen attract these multiple relationships?

As a 3 of clubs, the writer card, he would discharge his nervous energy through writing. It calmed him, but it’s also known as the panic attack card, so he was probably not very restful to live with. Threes can be extremely creative, but also creative sexually. This would make it harder for him to settle down. Many of his songs deal with relationships and failures, a typical 9 of hearts theme. Leaving in love, as one nine of hearts I know likes to say, seems to be what he chose to do, over and over again. 9 of hearts can have lots of disappointments in relationships, and can have more success finding satisfaction in love on a universal level. His fans loved him, and that seemed to be more important to him than a lifelong relationship.

What were his connections with his decade long relationships?

For Dominique Isserman and Marianne Ihlen, simply put, the 3 of clubs and the Ace of diamonds have a present life mars connection which can be very sexy. On top of this, Marianne Ihlen was his moon card, the 5 of hearts, her PRC, is moon to his birth card, the 3 of clubs. This can explain why they stayed together so long.

For Rebecca de Mornay, as a 10 of hearts, Leonard Cohen as the 3 of clubs is her neptune card, which means he would be her dream man, and she would never be able to see him clearly. With the 10 of hearts as her birth card, he would be moon to her in the past life spread, as his planetary ruling card is the 9 of hearts. This was the first time he had a connection with a card where he was the moon and she was the sun. This relationship did not last long, possibly because the sun card will never follow the moon card.

In 2001 he wrote a song called You Have Loved Enough- a 9 of hearts represents the end of a cycle of love… no wonder he wrote about love this way.