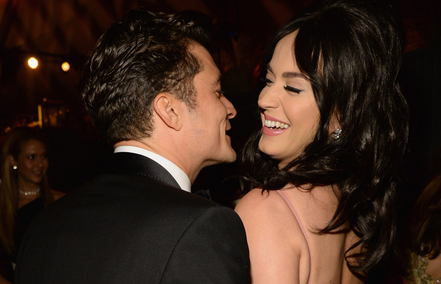 New Couple Alert! It seems that Katy Perry and Orlando Bloom are an item! What are their cards, and how are they connected?

Katy Perry was born October 25th, 1984. This makes her a 10 of Hearts Scorpio Rat. Her other two cards are the ace of hearts and the 3 of spades.

Katy Perry as a 10 of Hearts makes her the center of attention (think of another famous 10 of hearts, Miley Cyrus or Santigold) and enjoying every minute of it. Her ruling cards, the Ace of Hearts and the 3 of spades make her more unmarriageable. How?

The Ace of Hearts means a desire for love, but also a need to be alone. Aces can also be very self centered, and the 10 of Hearts is like an ace since it has a one also.

The 3 of spades can be an insecure card that needs creativity to calm down. With Rats already being naturally nervous, this can be a strain on personal relationships.

Scorpios and Capricorns aren’t naturally friends, but Rats and Dragons get along very well. Dragons generally get along with lots of people, due to their charm and magnetism. But Rats enjoy being dazzled by Dragons, while the heady Rat can fascinate the Dragon with their conversation.

Orlando Bloom was born January 13, 1977, which makes him a Capricorn Dragon, Ace of Spades, 9 of clubs.

Being the 9 of clubs, PLUS being a dragon makes him a very sexy person. Why? The 9 of clubs has the first karma card of the Queen of hearts, and it sits in the Venus row of the life spread. Because it also sits in the Saturn line, these people can get in trouble for being a little… too sexy. (Think Justin Timberlake, another 9 of clubs).

The Ace of Spades simply means a desire for work. It can mean that people who have this card make work the most important thing in their lives, over any relationships. As a Capricorn, he will certainly tend to exaggerate this tendency, as Capricorns love to work. It can make him a bit stiff.

How do Orlando Bloom and Katy Perry get along?

Well, from the life spread, they are far apart. But look closer.

There’s a beautiful Venus past life connection between Orlando Bloom’s first karma card, the Queen of hearts, and Katy Perry’s birth card, the 10 of hearts.

There’s another past life Venus connection between his Ace of Spades birth card and her 3 of Spades PRC.

This means the love flows both ways.

Also, his PRC, the 9 of clubs, has a past life venus connection with her first karma card, the Jack of clubs.

As they both are Aces, it can help them understand each other’s need for space. It can also make them more self centered (and in Katy Perry’s case, EXTRA-self centered as a 10 as well) and this can cause friction in the relationship after the honeymoon period has worn off. As they are both Aces, they are very similar people underneath. This can be a problem, as they can each accuse the other one of being selfish and never thinking about THEIR needs.

Or, if they realize how alike they are, they can make adjustments to each other and laugh about it when they get angry at each other.