One of the most famous love triangles in rock history, Joey Ramone, aka (Jeffrey Ross Hyman (May 19, 1951 – April 15, 2001), known by his stage name Joey Ramone, was an American musician and singer-songwriter, lead vocalist of the punk rock band the Ramones.) fell in love with Linda Daniele (born July 24, 1960). Linda loved Joey, but Johnny Ramone fell in love with her, and wanted her. Johnny Ramone, aka (John William Cummings (October 8, 1948 – September 15, 2004), was the co-leader of the Ramones with Joey Ramone. Linda then married Johnny Ramone, and became Linda Ramone.

What were their connections in the cards?

Joey Ramone was a Taurus Cat, King of clubs and 4 of hearts. He was also extremely OCD, which meant he couldn’t throw things away, and kept turning on and off the lights, and running the water in the bathroom.

Because Joey Ramone was a Cat, he HATED conflict. Johnny Ramone, as a Rat, wanted stability, but he also had the will to power that Joey Ramone lacked. Johnny didn’t mind conflict as long as he got his way. Linda Ramone felt caught in the middle, a much younger person, between these two dominant personalities.

Linda Daniele was 18 when her best friend took her to CBGB’s and she saw The Ramones perform for the first time. She was soon a regular of the club and began dating Joey Ramone. The couple’s romance lasted for three and a half years but was brought to an end when Linda left Joey for his bandmate and best friend Johnny Ramone.

In her own words: “I was totally in love with Joey, and Joey was totally in love with me, but Johnny Ramone fell in love with me during this time, and Johnny never gives up. So Joey had to fight for me with Johnny. He tried for a little while, but basically he didn’t want the band to break up. That’s the one thing that people don’t realize: the Ramones were the most important thing to Joey and Johnny. Joey tried, and he would tell Johnny not to talk to me, and Johnny would say, “I don’t care what you say, she’s my best friend.” So one day Joey said to me, “Johnny’s in love with you. Monty told me.” And I was like, “I don’t think so.” And he said, “But I can’t get rid of Johnny.” Me and Joey had our time together, and we taught each other a lot. He was really my first boyfriend that I moved in with, but I realized at that point that Johnny was never going to let go. I guess I was attracted to Johnny because he was so powerful and he was in charge.

I was 21 at this point. I met Joey when I was 18. I’m not blaming that; you know what you’re doing. But you don’t really think about what you’re doing. You always heard about Anita Pallenberg, Keith Richards, and Brian Jones, but you don’t realize once you go from one to the other it isn’t going to be pink and rosy. It’s going to be pretty bad. And Joey was pretty upset, but it was my destiny to be with Johnny.” (Interview)”

As Suzanne White says, “The Game of Cat and Mouse is the one I would resist playing.” The Cat is attracted to the Rat, but they should not get together. They are just tempermentally unsuited to each other. The Rat does not avoid conflict, and the cat does. It can lead to fights, which are hard to make up from. Indeed, Joey Ramone thought the band and Johnny Ramone were more important than his relationship, so he “gave Linda up” for the band. But even though he did this. he stopped speaking to Johnny Ramone, and though they kept playing in the band, nothing was the same.

Why was Johnny Ramone so attracted to Linda Daniele? Why couldn’t she resist him? 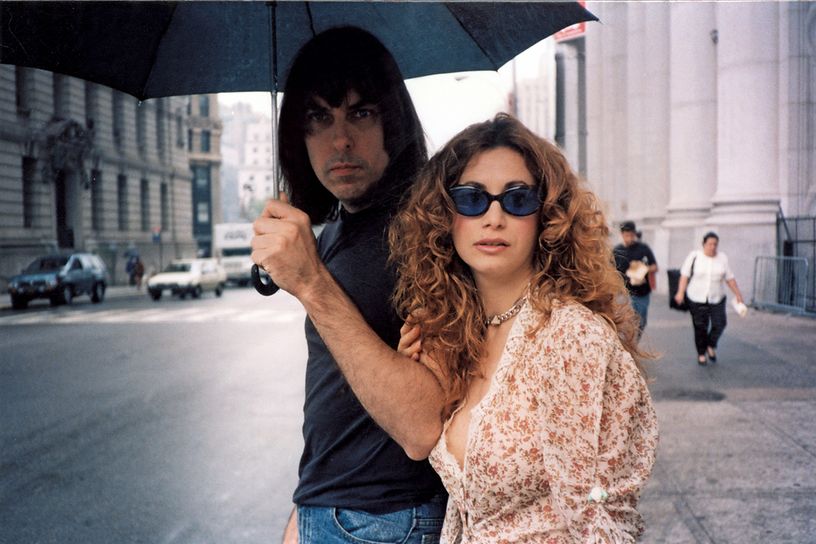 Well, she was probably tired of Joey Ramone’s OCD ways, but more than that, two rats together is a good match.

They were much better suited to each other than Linda and Joey Ramone. Rats understand each other, and enjoy being together. Even if both are nervous, and want power, both can yield to the other, and together, get a lot more done than they could alone.

As Johnny Ramone was a Libra Rat, he was less frantic than most Rats.

As an Ace of diamonds, he wanted to get money as much as he could, and he did. He got so much money that his wife is now a full-time philanthropist, keeping his name alive. Ace of diamonds and 5 of hearts is one of the most unmarriageable combinations. Why? Because 5s like variety, especially 5 of hearts. And The Ace of hearts is his second karma card, which means he also had less of a fear of being alone than other cards.

But he wanted Linda, and he was relentless. He simply would not let go of her.

Because Linda Ramone was a 6 of hearts and he was a 5 of hearts, he felt safe with her, and wanted to support her. This is a sun-moon connection, and it’s perfect for marriage. This is what ultimately drew them together.

Also, Linda Ramone’s second karma card of the 3 of diamonds is his venus card for the Ace of diamonds in the past life spread. His love for her came from a previous life.

Furthermore, Johnny Ramone’s second karma card, the 5 of clubs, was sun to her birth card, the 4 of clubs. This is yet another sun-moon connection, making him the sun, meaning she would see him as the leader in the relationship, and would do what he wanted.