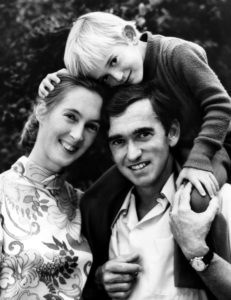 Jane Goodall, Champion of the Chimpanzees, is an Aries dog! Wow!

Talk about champion of the underdog! Being born on April 3rd, 1934, she is a 5 of spades birth card, 9 of spades planetary ruling card.

She said even as a young girl all she ever wanted to do was live in Africa, that was her dream, not a husband or family or anything like that. And she got her wish. She didn’t have any degrees, but lived in Africa, and is now considered a worldwide expert on chimps. She even has a doctorate!

She went back and forth all of the time, suitable for a 5 of spades. She hung out with Hugo van Lawick but nothing was said, apparently, about how they felt for one another. Then he asked her to marry him by telegram, after he left, and she said yes.

Jane Goodall had a child, Grub, in 1967 because that was what you did. but she didn’t think about how it would alter her life, how it would make her less able to be with the chimps. She did it for the experience. And she said that having a child made her a better researcher, and a better mother.

As a double spade, she thought of everything in terms of work. And her work continues to this day, as she has not spent more than 3 weeks consecutively anywhere since 1991, working on behalf of the animals, trying to meet people to drum up support. This is a very 5 of spades way of going about advocacy, whereas other, more sedate cards like a six or a ten might sit down and start a foundation somewhere and just build relationships in that local area.

And her husband, Hugo van Lawick was a Jack of Diamonds and 2 of spades. Born on April 10th, 1937. He was an Aries Rat. He is considered today to be one of the greatest nature photographers to have ever lived. As a Jack of Diamonds the constant movement and creativity appealed to him. He didn’t want to grow up.

But he was also a 2 of Spades, so he loved working in partnership and this is how for the first few years of his relationship with Jane Goodall, how they worked. Because he needed to work for money he couldn’t keep hanging around the chimps, National Geographic sent him on other assignments, and so they drifted apart, emotionally and physically.

The first connection they shared with each other was a mutual Jupiter connection. Directly between their birth cards, which meant they were good for each other’s careers, and money would flow well between them. She said she never cared much about money, but did what she had to do to make sure it flowed in to protect the chimps, and so she could keep studying them.

So in addition, between his 2 of spades and her 5 of spades, they had that past life mars connection which was very nice for them. Very sexy. He was very attracted to her.

And she was also his past life neptune card, so in a way she was his dream woman. For their planetary ruling cards, the 9 of spades to the 2 of spades. This was a good connection to have.

He smoked a lot and died of emphysema when he was 65. She is still living.

They both got divorced in 1974 and married other people after awhile. They were fighting a lot, (very Aries) and neither one would give up their way of life for the other. He felt that she should give up her life for him, and go down to the Serengeti and study animals there while he worked. However she had a different idea of what she wanted her life to be about.  Their son lives in Dar Es Salaam, Tanzania, to be near them.