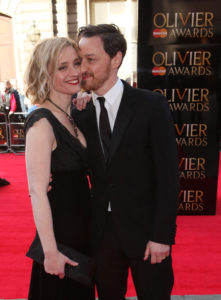 James McAvoy, known for his starring roles as Professor Charles Xavier in the X-Men movies, was born April 21, 1979, making him a Taurus Goat, King of Clubs, 4 of hearts.  As a member of the royal family, he will be impatient with pettiness, and as the King of Clubs, he will be the least likely to misuse his intellectual power. With the four of hearts planetary ruling card, he can be very focused on home and family, and be a bit controlling. However it can also make him more faithful, someone who is happy when his family is happy.

Anne Marie Duff was born October 8, 1970, which makes her a Libra Dog, Ace of Diamonds, 5 of hearts. As an Ace of diamonds, she is more independent than the average card, and has less of a fear of being alone. Aces know very well how to be alone. As Anne Marie Duff is an Ace of Diamonds, she cares about how much money she makes, and sometimes has a hard time asking for the money she deserves. As the 5 of hearts ruler, she might have a wandering heart, that could be satisfied by a constant rotation of new friends in her life. The combination of the Ace of Diamonds and Five of Hearts can be a worrisome one, as the 5 of hearts can take huge risks without thinking of the consequences.

They are notoriously quiet about their private life. But what can we deduce from their birthdays?

As a Taurus Goat, James McAvoy can be dependent, and sensuous. He needs security but is not good at providing it. He needs praise but can’t give much of that either. He needs a serious mate, so taking up with a Dog helped him succeed in the world. According to his Chinese and western signs, he may be given to fits of frustration, self-doubt and even violence.

Anne Marie Duff as a Libra Dog can be endlessly kind. Her weakness is simply that she puts up with too much flak. She barks but she is also looking out for the downtrodden. When McAvoy was going to turn down an advertising campaign, saying he “didn’t want the money” she said, “then take the money and give it to a charity!” And within 4 minutes he was on the phone to his agent saying, “I’ll do it.” Dogs and Goats… well… let’s just say certain aspects of this match were not ideal.

He will naturally feel close to her, and want to build a family and a home with her, and that’s exactly what they did together. As he got to be a bigger movie star, it’s possible that the money and the fame split them apart, or simply that he wanted to be more of a leader in a relationship, and that isn’t going to happen with someone you are moon to.

However, as a Taurus Goat he NEEDS a relationship, someone to lean on, and he’s not going to be adept at being the leader in a relationship either- he is dependent and not suited to leading a relationship. Hopefully he can find someone who (subtly) wears the pants.

What will happen to Anne Marie Duff? Being with a man who was her moon card could make Anne Marie Duff settle down more than the average 5 of hearts.  Often 5 of hearts will do something simply for the experience of it. Then, once they have satisfied their need for experience, they will not try it again. So we can deduce that Anne Marie Duff has had 10 years of experience with marriage, and that will be sufficient for her. She will most likely have fun and have partners but not marry again.