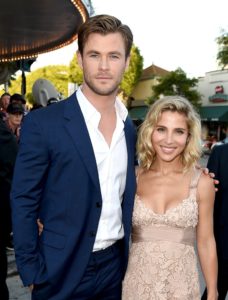 So Elsa Pataky and Chris Hemsworth!

Elsa Pataky stars in the Fast and Furious Franchise, and she was born on July 18 1976.

Chris Hemsworth plays THOR in the marvel movies, and was born August 11 1983, which makes them a Cancer Dragon Leo Pig combo, she’s a 10 of clubs and Queen of hearts, and he’s a 2 of diamonds. Generally pigs and dragons can get along. Dragons are emotional, and strong, and pigs respond well to that. Cancer and Leo is less of a common combination.

Generally the 10 of clubs is a hard card to have a relationship with, because they are focused on their success in their careers. They’re extremely smart. The Queen of Hearts can be extremely interested in having children and a family, so this can give her dueling aspects of her personality.

The 2 of diamonds is the past life mars card for the Queen of hearts, Elsa’s planetary ruling card, which means that they have a very sexy connection.

Chris Hemsworth and Elsa Pataky also have a vertical life spread mars connection from the Queen of hearts to the Ace of hearts, the second karma card of the 2 of diamonds. And then a vertical jupiter connection between that card and her planetary ruling card, the Queen of Hearts. This makes it easy to keep money and prosperity flowing in their relationship.

Next, there’s a Venus connection between the second karma card of the 2 of diamonds, the 6 of clubs, and the queen of hearts. For Elsa to truly get a lot out of this relationship, she will have to act out her queen of hearts side. And as we can see, they have had three children together, and seem to be enjoying a happy and peaceful marriage. She says in an interview, Chris Hemsworth loves how positive and happy she is.

If she chooses to go back to working full time on movies, their relationship may suffer, but overall this is a happy marriage with lots of compatible connections to make it work.

Here is one of the scenes that Elsa Pataky has in the Fast and Furious movie.