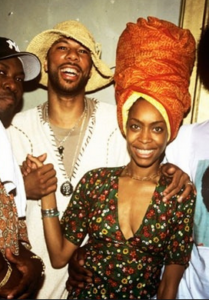 Here’s how Common described his relationship with Erykah Badu later:

“Yeah, the ‘Badu Box’ is real. Man, it could take you to another universe. Nah but seriously, she…that’s when you meet somebody that’s real special and you’re like, ‘Man, this woman’s got…she got something else, man. It ain’t just sex, it ain’t just the looks. It’s just man something that’s kind of like spirit-wise where you’re like, ‘This woman got something else.’ And that’s all it is.

“For me, I was just like, I appreciated her from all those aspects. Her being super-talented, her being real fresh and be into new shit I just wasn’t up on. And at the same token, that whole spiritual thing was like…and it’s real.”

Common as a March 13th Pisces Rat is a 10 of diamonds, 3 of spades. His eye is always on his work. And as a 3 of spades, he has to have duality in love. So he won’t be naturally faithful, even though he is a Pisces and a Rat, who both crave security.

Erykah Badu is a Queen of clubs will be very spiritual. She is also the 5 of spades, which means she loves traveling and loves changing things up. It’s hard for her to be satisfied with her work, with her lifestyle, and she’s wanting to experience everything. Since she’s the Queen, she will demand respect from those around her. Common, as a 10 of diamonds, will also demand respect, though he is not as strong as she is. Her spiritual side would make Common’s rapacious businessman 10 of diamonds side uncomfortable.

What were their compatibilities?

The most startling connection between Common and Erykah Badu is that his first karma card is the Queen of clubs, and this is her birth card. When you find your first karma card, you see them as a challenge, and they see you as a blessing. Probably Common was first drawn to Erykah Badu because he admired her. Then she started to remind him of the dark side of himself (perhaps the pot-smoking lassitude irritated him). And finally he decided he could not take the mirror that Erykah Badu showed him. Erykah Badu probably saw Common as a blessing, as long as he was interested in her spiritual lifestyle. As a 10 of diamonds, he would not be comfortable focusing on the spiritual for long, but while he did, they seemed happy together. After they drifted apart, Common was surprised at how he had been drawn into her world. But because she was his first karma card, it was fate.

Common also has a past life venus connection between his 3 of spades and Erykah Badu’s 5 of spades. This means that he will love her.

Karma card relationships may not last but if we keep our eyes open, they always teach us about ourselves.