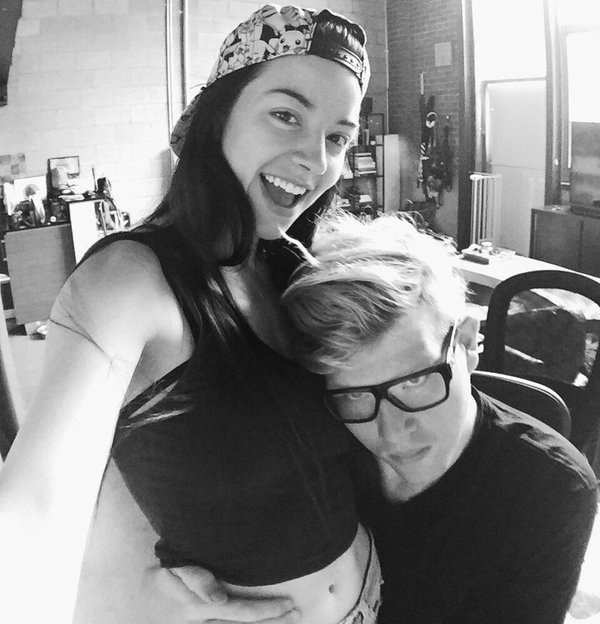 HANA and Blood Pop have been together for five years! They are a power couple!

Blood Pop is one of the hottest producers around, producing Madonna, Lady Gaga, Grimes, Justin Bieber and many others. His Track, Sorry, by Justin Bieber, was the first track on Youtube to get over 1 Billion views.

He’s a Leo Horse, Jack of clubs. Since he’s a Leo, he has just one card. Leo Horses are known for being head over hooves in love- and nothing else matters but their love. This makes the normally skittish horse steadier than average. The Jack of Clubs can love to argue,

HANA is a famous singer and dancer on tour with Grimes, her friend. She gained fame a couple of years ago for her track Clay, and now she’s becoming more well known with her new album. She’s an incredible singer and producer and I can listen to her for hours. As a Cancer Snake, she is a 4 of diamonds, with a planetary ruling card of the 4 of hearts. Cancer Snakes can twine around their lovers and be feudal about their mates! They love their well appointed homes and want to keep their mate there. They also have lots of money, and love to show it off. As a 4 of diamonds 4 of hearts, however, Hana will be more level-headed than your average Cancer Snake. A double four will give her a steady demeanor and a frame that is built for hard work. A 4 of diamonds has a hard time with love because of their saturn card, the Queen of hearts. She’s also in the venus row and the neptune line, which makes her have illusions about love that are not true. Usually the only way that 4 of diamonds can find happiness is by meeting a Jack of clubs. And now she has.

How are Blood Pop (aka Michael) and Hana relating in the cards?

The Jack of Clubs and the 4 of diamonds is one of the best connections for marriage. I personally know three people who have this connection and it works out really well for them.

Why is this such a good connection? Because if the 4 of diamonds is hard to get along with, and hard to please, the Jack of clubs doesn’t see it.

Why not? Because they are with their Neptune card. That’s right.

The Jack of clubs LOVES their Neptune card. The Neptune card means fantasies and dreams. Hana is Blood Pop’s dream woman. She can do no wrong. He will put her on a pedestal and worship her.

They can excuse just about any weirdness on the part of their 4 of diamonds person, because Jack of Clubs understand and love their own freedom. I’ve seen this with Jack of Clubs, their 4 of diamonds person does something completely ridiculous, like play video games day and night, and they just laugh it off, and say how much they love them. It’s incredible, watching a Neptune relationship play out. There is so much that gets excused in the name of this romantic love. The Neptune connection keeps the romance going. Even if the 4 of diamonds is not a particularly romantic person, the Jack of Clubs has permanent romantic feelings for them.

Hana could easily cheat on Blood pop if she wanted to.

But she is happy with him. Cancer Snakes love to twine around those they love and SQUEEZE. The Jack of clubs is a highly marriageable card, even though they like to argue and keep arguments going.

The 4 of diamonds is not an easily satisfied card, but with the 4 of hearts to mellow them out, they can be happy with one person and making a family. The 4 of hearts tends to get married young, and they do have control issues with those they love, trying to keep everyone at home and happy. The 4 of hearts wants a stable family environment over all things. With their 4 of spades first karma card, it also means that they can work too hard at times, and need to be moving and doing things to get out of it.

She is also his Uranus card, which means they will be friends first, and they will both allow each other a lot of freedom to be themselves. By all accounts, Hana and Blood Pop play a lot of video games together.

These two will probably stay together a long time, much longer than “the hollywood/music lifestyle” would allow for. Why? Because they are SO good together.