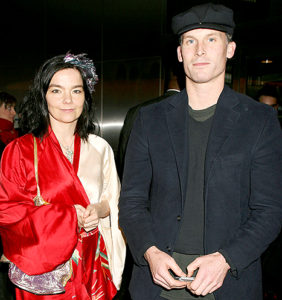 Bjork was born November 21st,1965. This makes her a Scorpio Snake. Queen of hearts, King of Spades, 5 of clubs.

Matthew Barney was born March 25, 1967. This makes him an Aries Goat. Jack of Clubs, 2 of clubs. He is suing Bjork to have greater custody over their daughter, Doa.

Bjork and Matthew Barney were together for 13 years. What were their connections?

Snakes and Goats go well together, as the Goat can depend on the snake, and the snake can provide. Snakes always seem to be rich.

They are both artsy and have gone far in their respective fields. Of course, Bjork has had more commercial success because she is more talented than Barney.

Queen of hearts is the most dreamy, neptune card in the deck. She is the mother card, and Bjork had a child when she was 19, and again when she married Barney. Her daughter, Doa, is 12 now. Bjork is known for her dreamy performances and music. But she is also a hard worker, going on tour and perfecting the beats in her songs and producing as well as writing her lyrics. This is her King of Spades side. No wonder she has been so successful. Her five of clubs side makes her love to travel.

Barney being the Jack of clubs means that he loves to play around, but he doesn’t want to be king. He wants to be crafty and artsy and act and make set designs. As a goat this tendency would be even enhanced. His two of clubs makes him argumentative, and have a fear of death. So he likes to keep people around him all the time to bounce ideas off of. It must have been hard to live with him. But Bjork’s 5 of clubs must have made him attracted to her in the past life spread, even if they were not close in the life spread.

Barney is a liar. It’s the Jack of Clubs thing. Lying is always a possibility. He went off with another artist and cheated on Bjork, so she divorced him. She wrote a whole break up album, and a song about it, called “History of Touches”

Never go up against the Queen of hearts in court. She will always win, because of the King of Spades in mars. So if I had to take a guess, I’d say Matthew Barney is wasting his time trying to sue her for custody. It’s not going to work.