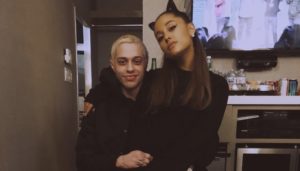 Mac Miller’s recent death has shocked many of us, as he died so young.

He broke up with Ariana Grande early in 2018. They dated from 2016-2018. Many of his fans have been blaming Ariana Grande for his death, when actually he could have chosen his relationship with her over drugs, and he chose drugs. He also said they just decided to break up and he was totally fine with it. And they both found other people.

She also said “she had cared for Mac and tried to support his sobriety for years, “But shaming/blaming women for a man’s inability to keep his shit together is a very major problem.”

Thanks for saying that Ariana! Stand up for this stupid assumption that you had anything to do with his addiction. He was doing drugs for 10 years before he even met her.

Mac has talked about his struggles with the bottle in the past, and Ariana says it was definitely an issue while they dated. She says, “Of course I didn’t share about how hard or scary it was while it was happening but it was.”

Ariana Grande recently announced she was engaged to Pete Davidson. She is a gorgeous pop star with an ethereal voice. He is a person with Crohn’s Disease, and a star on Saturday Night Live.

This makes her a Cancer Rooster, four of clubs, 6 of hearts in the cards. AND This makes him a Scorpio Rooster, 7 of clubs, Jack of clubs, and Jack of diamonds. Cancers and Scorpios, being water signs, can get along very well together. And because they are both roosters, they will understand each other on a deeper level. (like Beyonce and Jay-Z).

They are both clubs, which means they will love to talk and joke with each other.

Ariana Grande, being a four of clubs, is attracted to people who are involved in acting, and the entertainment industry, because of her venus card as the Jack of spades. It’s a real problem for fours of clubs, to find someone trustworthy to love.

They have a mutual Venus connection between his 7 of clubs and her 4 of clubs in the life spread. That means they truly love each other.

They also have a past life mars connection between his 7 of clubs and her 4 of clubs, which will make them very attracted to each other.

It’s interesting to note that Mac Miller’s card, the 8 of diamonds, has the 7 of clubs as second karma card. Perhaps when Pete Davidson is showing his negative side, he can act a bit like Mac Miller, abusing drugs and overspending.