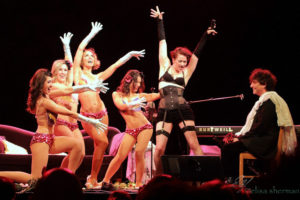 Why did Amanda Palmer and Neil Gaiman get together?

Some people think they did it for greater notoriety. Is this the real reason?

You would be hard pressed to see what would draw them together.

From a Chinese astrology perspective, they are well matched. He is a rat and she is a dragon. Rats and dragons get along famously. Rats admire the panache and fire of dragons. Dragons admire the stability and brilliant minds of the rats.

But from the Destiny card perspective it’s all perfectly clear why they got married in January 2011.

Because Amanda Palmer and Neil Gaiman are both clubs, they both love and respect words and knowledge.

But if you look at their birth cards, they are nowhere near each other in the life spread.

However, they share the most beautiful karma card connection.

You see, Amanda Palmer’s PRC is the Jack of spades, which is Neil Gaimans’ first karma card.

That means that he’s her second karma card. So he is connected to her, and knows her well, and can find her challenging. And she sees him as a blessing in her life, because he’s her second Karma card.

Amanda Palmer’s Jack of spades can make her pretty nutty. But she’s managed to make a career out of it, which works for her. I mean, who ELSE would shave off their eyebrows and then draw them on again every morning in new and interesting shapes? And who would find that attractive, except someone who is drawn to someone nutty like that?

But underneath her nuttiness, Amanda Palmer has the 4 of clubs, which means she craves stability, even as she tours the world and has a life as a musician.

And Neil Gaiman’s second karma card is the six of hearts, which means that he has the ability to love steadfastly, and completely, in relationships.

But totally workaholic right? Because he’s a ten of clubs. And Amanda Palmer, being a jack of spades, workaholic as well. Would that not cause a soupcon of friction, perhaps?

Well, no, because, as Amanda Palmer said on her blog,

THAT’S a karma card relationship for you.

So, the verdict: is it true love?

I would say yes. Yes it jolly well is.